A couple of months ago, I made the first commits to a repository in which I have been experimenting with CiviCRM Buildkit on Docker. It's gone quite well so far. Last week we found out that as part of the Google Summer of Code, we will be running two Docker based projects, so it seemed like a good time for a post.

Health warning: I've tried to make this post accessible to a wide audience but it does get technical in places.

For those unfamiliar with CiviCRM buildkit, it is a collection of roughly 20 tools designed specifically for developing and testing CiviCRM.

For those unfamiliar with Docker, it is a tool to "build, ship and run any app anywhere". Putting it another way, it is a tool that can be used for a variety of different applications, and is designed to make the lives of system administrators easier.

My primary motivation in exploring Docker was to see if it could be the solution to a problem that has been on my mind since I started using CiviCRM ten years ago. Namely, that there is a whole class of bugs and issues that arise from differences in the platforms that people use to host CiviCRM. And if we can provide a single recommended, and easy to replicate, platform, we can eliminate this entire class of problems for our users. Note that providing a single recommended platform doesn't stop people from using other platforms - it just provides an easy path for people that are platform agnostic.

This is certainly not an easy problem to solve, and Docker is only the latest 'shiny thing' in a long line of 'shiny things' that attempts to solve it. Others approaches include generic configuration management tools like Ansible, and more domain specific tools like Aegir and indeed, CiviCRM's very own buildkit.

I decided my immediate goal would be to create a Docker environment specically aimed at CiviCRM developers that eases the pain of setting up your local development environment. Contrast this to a Docker set up for sysadmins aimed at production hosting. Both are an important part of the picture and I am sure we can cater for both in the medium to long term, but I wanted to focus on scratching my own itch first.

Before diving in, I did a bit of research to see what others had done in the 'CiviCRM and Docker' space. A few others have started along the road as well. A couple of highlights:

It was fun and educational to play with these implementations but none stood out as doing exactly what I wanted to do. I was also keen to get my hands dirty and learn through doing so I created my own repo. I've been using this set up for day to day development for a couple of months now, and it is working nicely. Here's a quick run down of the features: 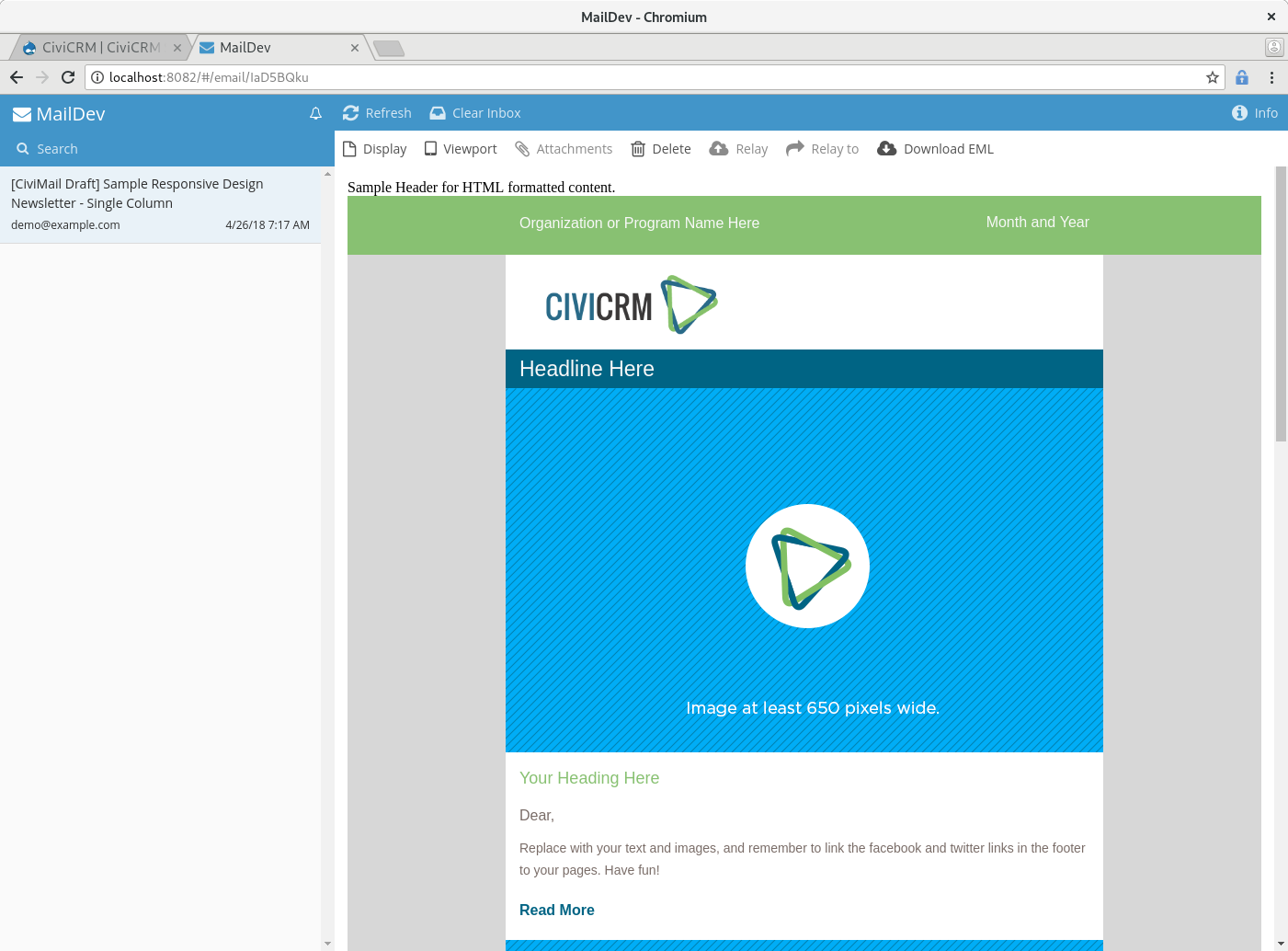 Docker makes it really easy to plug in other applications and technologies into your stack. It was fairly trivial to add MailDev and I am excited to think about what other technologies a Docker based set up could open up to our community.

There were a few hoops to jump through to get buildkit working nicely with Docker. A couple of things I have learned along the way:

Feel free to download the repo and give it a try. A few early adopters have been able to get it up and running on Mac and Linux and I've made a few new releases based on their feedback. I am happy to help on the sysadmin channel, and to help with any issues you create.

If you have are using Docker with CiviCRM it would be great to hear from you. As mentioned, we have two students working on Docker and CiviCRM as part of the google summer of code so the next few months should see a lot of devlopments in this space and it would be great to have you involved. Please say hello in the sysadmin channel.

Nice post, didn't know about the cloud native project but definitely a step in the right direction

This is an extremely positive step, we are increasingly using Docker so an 'official' civicrm image for sysadmins would remove a lot of headache. In particular with PHP supporting older versions for less time (EoL from 7.0 is only a few month away) dockerising Civi would make the process of testing and migrating to newer versions easier. Many thanks for your work on this Michael, I'll pull your image and take a look now.

This looks very exciting. Esp. interested in the maildev thing as I'm always paranoid in development of accidentally emailing people!

I look forward to having a play and will follow developments in the summer of code.

Sharing of useful extensions during the Dutch/Flemish webinar