Live from the Party of European Socialists Council

The PES -who sponsored the development of the badge feature- used civievent for the first time at a big scale: their council in warsow. You might see some bits of it in the news, like the greek prime minister that just finished his speech, but only on this blog will you know more about part of the logistic of such a big event, and how civicrm helped it.

We put in place 3 different registrations, one for the journalist, one for the representatives and guests of the national parties and the last one for the activists.

All in all, that's more than 500 participants, the vast majority of them registering online beforehand, a few VIPs and less disciplined doing it at the registration desks.

The activists' registration process was the most complex one, and they used a lot of statues to track the various stages each participant went through. As 100 activists could come for free, and way more registered to benefit from it. Lots of mailings, lots of different statues and steps on the participants (based on very complicated criterias to insure a good mix of countries and political consideration way too complex for me to understand) and follows up if they confirmed, returned their travel documents...

At the end, we had 10 different roles, ranging from the the delegates with voting rights to the security (a meeting with members of various national parliaments, prime ministers and various elected people means a lot of security, felt like an airport at times).

We implemented a custom badge template, so each of the role got a color and layout, and different information beside the name (the party, the country, the media...). They found badges on A6 paper, where you can print both side of the badge in one go, peel and it's ready to ware.

The initial idea was to print them on demand at the registration desk.

To do that, we modified the list of participants to add the relevant columns (country, party) and get rid of unuseful ones (name of the meeting, fee details). We also added a new action link for each participant to directly print the badge from that list.

Add the wonderful datatable jquery library, so from the same listing, they could filter the list by typing part of the name of the participant or the party and directly found the right person, and the badge is almost ready to print.


Lastly, we added an ajax tool so when you clicked on the "registred" status, it would switch it to "attended".

However, we quickly realised that because civicrm can't bypass the step of choosing the badge format, it would impose and extra step, and an extra 20 seconds when you are doing it 500 times, with lines of very important people waiting for their badges is not really an option. We then decided to add a bookmark on each of the participant in the pdf, so you could generate the pdf with all the badges, find the participant in the list in civicrm and jump directly into the generated pdf.

Then we got a few issues:
1) printing on a A6 format is not standard, and out of the 5 printers at the desk, only one was able to handle it.
2) Anyway it takes a long time to print the pdf, especially because that stubborn printer refused to be set on A6 as a default, so everytime you had to set it (and the windows they use was a polish version to make it extra easy)

All in all, the solution was to print the badges the night before make nice stacks per party and distribute them. This worked smoothly and the team doing the registration was impressive handling the rush, the pressure and the security issues smoothly. 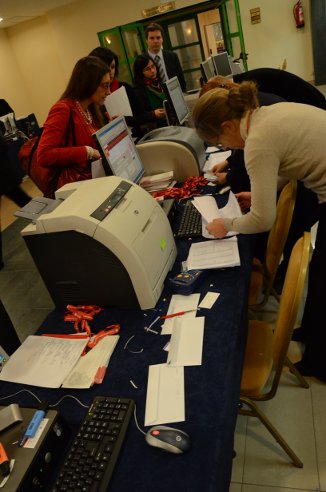 However, there is one place where civicrm should have a better UI for the registration of a new person on the spot: Doing it from the back office needs several steps:

We did then modify the online registration, added a test so only admin could see it and put the profile containing just the needed fields.
This was almost a one step solution, but civicrm having a mandatory email field (why is this field mandatory, oh why ?). We added a few dozen sfdogubsdfdfg@dfsg.com wrong emails, but could register the badges. However, as the dedupe process has still a few glitches (you can get twice the same contact as a participant for the same event), we will have some cleanup to do when the rush is over.

All in all, the day went smoothly, but let me share with you the key lesson of a successful event: having as much as possible done before. No matter what, you will have to improvise on the spot to deal with the net that is flacky, the coffee that is polish or the temperature that could have been quite a few more degrees, but the more is done before, the easiest that's going to be... and do assume that the internet connection won't work, and print the lists of participant and have pens to mark then as attended the good all fashioned way.

And on that topic, a few things should have been done to make the online registration form more bulletproof: Insuring that the name is not ALL IN UPPERCASE, not all in lowercase, providing fixed lists of values (eg. the name of the parties) whenever possible, checking that the person don't add the name of the country in the last name field and in general that the content added does fit on the badge... In general, whatever can be wrongly inputed will be at least once when you have several hundred people that register.

Time to wrap it up: I'd like to thanks the PES to have sponsored the badge feature and shipped me to warsow, and to their members in the European parliament to have organised an event this evening... and invited our very own Piotr and Michal (and yes guys, you have your badge ready, see you soon).

so, I read 'Live from the party' & decided to read this but it turned out to be a bunch of politicians :-)

Well, the end of the title was "[...]of European Socialists Council"

should have hinted you about it ;)

Hey, interesting point about UI for the registration of a new person on the spot.

I know that a lot of Civi's paid-for competitors have special screens designed for registering event participants on the day on a laptop perched on a table next to the orange juice. They generally pitch it as a fairly big selling point.

The screen on civicrm exists already, just clunky. IMO, the best is to modify the normal online registration so it doesn't need an email, and/or having an option like the online registration, but where you can set different profiles for the admin/backoffice