CiviCRM support for multiple languages and locales has been present for many years already. Features like multilingual donation forms, for instance, are now both common and easy to use. Some usages, however, have remained a source of minor headaches. With the release of CiviCRM 4.7.13, a small step has been made in order to fix a major annoyance that affected multilingual emails.

Until now, there was no effective way for CiviCRM to determine the target language of mail merge tokens when mass emailing. Consequently, many emails would end up with :

Without a reliable method to decide on the target language of a message, token substitutions would be applied based on the site's default language. This limitation has now been fixed. Organizations that must reach out to a linguistically diverse network can do so with the certainty of reaching out to their constituents in a language they understand.

a) Set a language for each bulk email

When sending out a mass email, it is now required to specify the language of that message.

This language is also exposed in the mailing search form to help track messages based on language. 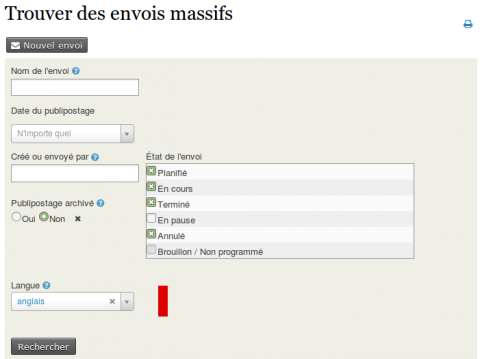 Since each mailing is now targeted based on a unique language, every message should be correctly localized.

b) Choose a language strategy for scheduled reminders

The language of scheduled reminders can be set according to either one of those three options: 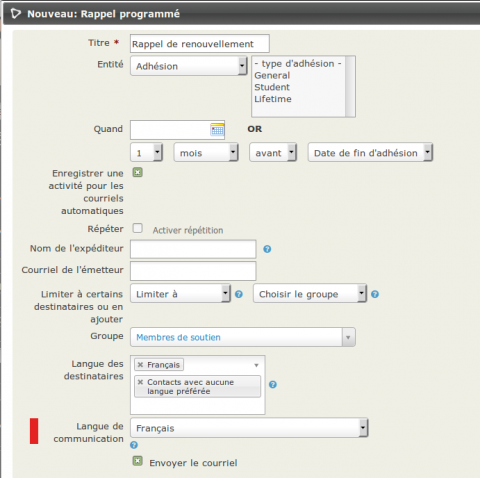 A small tip on grouping recipients

Whenever a multilingual email is sent out to various users, it is recommended to send out multiple messages, each written in their target's language. In order to do this, it may be essential to filter each list of recipients according to their preferred language. In other words, there must exist one smart group per language.

Since language is rarely the only criterion used for grouping recipients, one of the following tactics may be required in order to target each group in their proper languages:

In any case, these tactics remain a tedious and error prone process. In order to alleviate this situation, a new option has been introduced to filter recipients based on their preferred language. This new filter is therefore combined with the *restrict to group* option. At the moment of writing, however, this feature is only available for scheduled reminders. 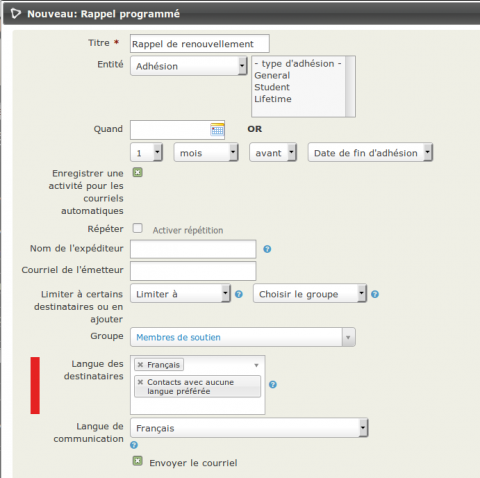 We'd like to thank the National Democratic Institute (NDI) for their financial support, which helped us to acclerate the implementation those improvements.

Filed under
CiviMail
Internationalization and Localization

This looks great and I was really excited to use it. But after spending 40 hours on this, I have seen that it was in vain because it isn't working as expected.

Any idea why this is happening?

Was this the intended behaviour?

Thanks for your feedback.

What you need to know :

To do what you want, what we usually do is :

As mentionned it's an ongoing improvement and we are open to update the behavior. The obvious way to do it is to add the Recipient language filter to the bulk mailing screen. Do you think it would resolve your problem ? Do you have something else in mind ?

Getting out of limbo with core extensions