Calling all users of the Stripe Payment Processor!

Do you use the Stripe Payment Processor? Do you want to offer your donors the option to give directly from their bank account? Please join 9to5 and MJW Consulting to make it happen!

What will this new development do?

iATS Payments: We have a Winner & an announcement!

Thank you again to all who participated in our Summer Survey. We are currently reviewing the results and already have some exciting ideas that we hope to present to the community soon, so watch this space!

We have a Winner

We would like to congratulate Larry Kuttner, IT Manager at Northeast Sustainable Energy Association, who is our lucky winner of a $500.00 donation to the non-profit organization of his choice.

If you would like to know more about the wonderful work NESEA does, you can check them out here: http://nesea.org/about

Last but not least, in iATS continued commitment to support the CiviCRM community, we are excited to announce the Beta release of our new iATS CiviCRM payment extension. We are committed to providing the most advanced, secure & fully integrated payments platform to meet the...

With the September 14th deadline for SCA payments and Stripe increasingly reminding users about their PCI compliance many of you will be wondering what is happening with the new Stripe extension that was funded in record time through the CiviCRM Make it Happen programme.

The good news is that it is nearly ready!

If you are keen to try out a preview we have today released a first alpha version.  It should not be used on production sites as many things that used to work do not work yet.  But if you use-case is a simple contribution page with a single payment processor and you are not accepting recurring payments then you will have no problems.

The new version requires a "helper" extension that contains...

Plastic Pollution Coalition is a project of Earth Island Institute. We focus on:

I started working as the Technology & Digital Operations Director with Plastic Pollution Coalition in June 2019, and by the end of July 2019, we had to migrate from NationBuilder to another CRM! One...

This extension integrates the Bitpay payment processor with CiviCRM and allows you to accept payments that can be paid in Bitcoin and Bitcoin Cash.

MJW Consulting were approached by the Calyx Institute to develop a replacement for the old bitcoin extension that was no longer supported.

Setup is straightforward, you have to setup an account at https://bitpay.com, "pair" your system with their API and add the payment processor to one or more contribution pages.  On the contribution page you select items to pay for in the normal way, then on the "Thankyou" page a bitpay invoice is displayed: 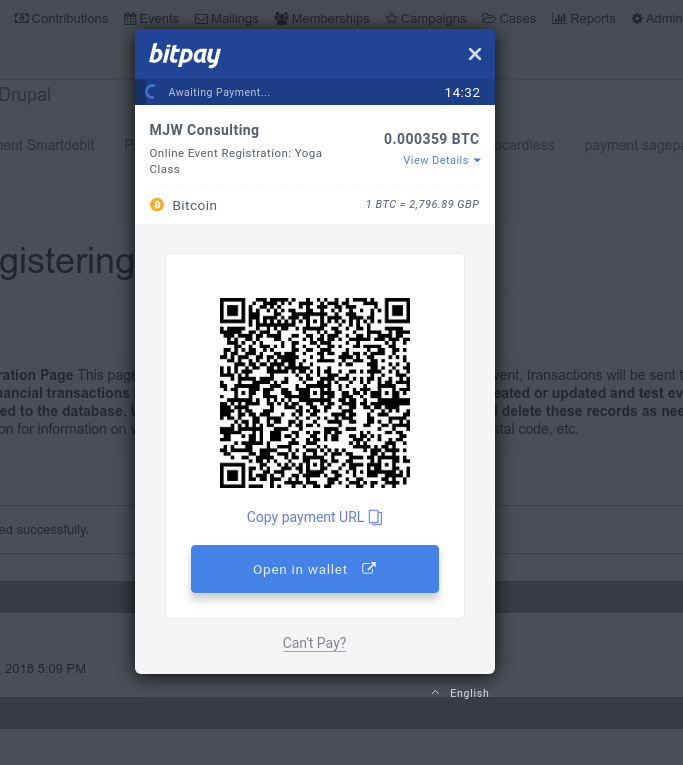 It's time to take your CiviCRM skills to the next level! Join us for two days of intensive hands-on learning, individual attention from CiviCRM experts and networking with nonprofit peers.

Get an early-bird discount if you register by March 12.

We will cover all the most commonly-used core components of CiviCRM. This is your chance to become familiar with parts of Civi that you were curious about but haven't ventured into. You may also pick up better ways to accomplish the tasks you already do in Civi!

Fair Voting in Canada: In it for the long haul with CiviCRM

By AlanDixon
Filed under CiviContribute, Case studies and user stories

This month, British Columbians (in Canada) will be voting on whether to adopt proportional representation (PR) when electing their provincial representatives. If they do, they'll be the first province in Canada to do so.

Fair Vote Canada has been advocating for proportional representation in Canada's voting systems for more than 10 years, and I've been working with them for almost as long, using CiviCRM. They've grown into using more and more of CiviCRM's features along with their own growth in numbers, budget and sophistication.

For the BC PR campaign, they're pulling out all the stops - raising more than twice as much money this year...

If you've heard of stripe you'll know it's a great platform for accepting credit card payments.  If you haven't heard of it and are reading this then you should try it out: https://stripe.com

If you already use Stripe please read to the end and upgrade to 5.0 as soon as possible.

From the Stripe website: "Stripe is the best way to accept payments online. Stripe aims to expand internet commerce by making it easy to process transactions and manage an online business."

There are three reasons I recommend it to my clients:

Tadpole has been working with Andrei Mondoc, the developer of CFC, to extend the availability of processors to support memberships. Since memberships typically use Price Sets, this work also allows for Donations that use Price Sets and Line Items within a contribution page. This work was supported by the Seismological Society of America, whose membership structure includes special subscriptions options and access to gated content based on their Membership Type. (For a more detailed description of the SSA project, see this case study).

The following processors were required to accomplish the goal: Membership, Line Item, and Order. These new processors allow us to (1) create a form for each Member Type (e.g., Regular, Student, Life), (2) present the respective subscription options and (3) update Member...

I had always been thinking of developing a mobile app for CiviCRM and in the process of achieving the same, I have released an initial version of my mobile app just for Android named as SMARTCIVI.

Smartcivi is an Android mobile application for CiviCRM which is used for displaying CiviCRM content in Mobile Application – For now smartcivi is just a read only application.

In this version of SmartCivi you will have the following option listing a basic information of CiviCRM Data in the following.

Login Page: Allows you to get connected with your CiviCRM website using the below details